India is a land of variety of crafts

India's rich cultural heritage and centuries of evolutionary tradition is manifested by the huge variety of handicrafts made all over the country. Handicrafts are a mirror of the cultural identity of the ethnic people who make it. 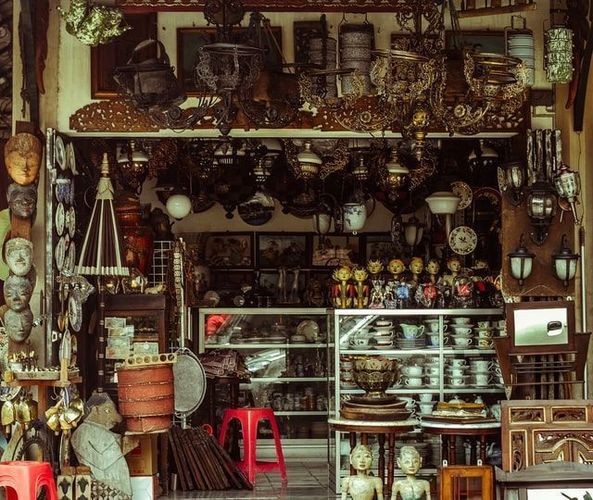 The crafts of India are diverse, rich in history, culture and religion. The craft of each state in India reflect the influence of different empires. Throughout centuries, crafts have been embedded as a culture and tradition within rural communities.

Crafts of Gujarat
Gujarat is renowned for its textile production methods. Bordering Rajasthan, the two states share similarities in culture and identity. The ancient Indus Valley Civilization inhabited the entire region, including Rajasthan and Punjab during Medieval India. They embarked on this textile industry in Gujarat. Within textile production, each caste is assigned to an occupation of its own. These are, weaving, dyeing and printing. For example, the Salvi caste is assigned to weaving.Garment producers bring these elements together to form the identity of Gujarati textiles. Direct application is a method also symbolic to Gujarati garments. Paint and other applicants are used to form patterns on fabric for dupattas, ghagras (long skirt) and turbans. Block printing is a widely used form of direct application. In Bandhani , a unique Gujarati craft, fabric is tied at different sections before dyeing to create patterns.This foundation of forming patterns through dyeing has emerged from the rural communities of this state. Along with the complete image of a Gujarati woman are large bangles made of ivory and plastic, these are symbols of a married woman. Conch shell and shellac bangles are the most common. Conch shell bangles are plain white with a light shade of a brighter colour where as shellac bangles are shaped as a shell, painted and decorated with glitter.These have in recent years become an accessory in both domestic and international markets..

Crafts of Rajasthan
Rajasthan, recognised by its Royal heritage is a prominent and well-established craft industry. Craft remains a tradition in Rajasthan, preserved over centuries by the stronghold of the Royal Rajput family. Within the craft industry are smaller occupations. These include, fabric colouration and embellishment, decorative painting and puppetry. Craft workers see this not as an occupation, but rather a mark of respect to their heritage. In the process of fabric colouration, woven fabrics are treated by methods such as tie-dyeing, resist dyeing and direct application. The dupatta worn by women show the popularity of dyeing. In 2008, traditional Jodhpur garments inspired designer Raghavendra Rathore's collection, Rathore Jodhpur.Fabric dyeing belongs to the Chippa caste of Rajasthan. Fabrics are embellished with mirror embroidery, symbolic to Rajasthan and wooden beading once dyed. The trend of mirror embroidery is also visible on dupattas in Punjab, known as the phulkari. Decorative patterns adorn all surfaces in Rajasthan. Interiors of homes are painted with floral motifs; similar bindi (dotted) designs are seen on garments. The clipped camel is unique to Rajasthan. In this, patterns are imprinted on the hide of the camel, taken place during the Pushkar and Nagaur festivals by the Rabari caste. Puppetry and theatre has remained a popular form of entertainment in Rajasthan. Recently, its popularity has reduced with increased interest in film and television amongst rural communities. The nat bhat caste produces these marionette style puppets. Facial expressions are painted on a mango wood head and the body is covered in decorative, Rajasthani clothing. The strings loosely bind the arms and torso together to give flexibility for movement. These puppets usually perform in legends and mythology conveying a moral message. The Rajasthani craft industry is iconic to the identity of India with many of its styles reaching the international market. Tie-dyeing is an example of how international fashion aesthetics h

Crafts of South India
The diversity of religious beliefs has had a great impact on the crafts of Southern India . The region has seen the rule of various empires such as the Mughal, Portuguese, Dutch, French and British.Each has left their mark of style on traditional crafts. The craft industry of South India has established itself commercially in the nation, whilst reflecting a long history of foreign rule. Dravidian style, stone carved temples reflect the influence of Hinduism whilst Roman Catholic churches echo the impact of the British rule. Temple carvings are symbolic of the craft skills in the Tamil Nadu region. The Meenakshi temple of Madurai typifies the skills and devotion put into this craftwork.Each section of the temple is a sacred shrine to a deity. North of Tamil Nadu is Karnataka, a region renowned for its wood and stone craftwork. The forests of this region provide extensive supplies of raw materials, mostly rosewood. For wood workers, crafting statues for large temples is a major source of income. The forms of characters from Hindu mythology are carefully shaped with a chisel. Soapstone is also commonly used to carve statues giving them a unique textural quality and smooth finish.

Crafts of Bihar
Bihar , recognised by its Madhubani/Mithila Painting, Bhagalpur painting which is also known as Manjusha Art & extra ordinary delicacy of quilting.

Crafts in Present time
The crafts of India have been valued throughout time; their existence today proves the efforts put into their preservation. Contemporary designers such as Ritu Kumar and Ritu Virani are constantly embedding traditional crafts into their designs. Also, there is a complete educational institute, Indian Institute of Crafts and Design (IICD) which is established in Jaipur, Rajasthan, which mainly educates for the crafts and their existence with design. Despite these efforts, the roots of these crafts, which are the rural craftsmen, are in decline. This argued by the India Foundation for the Arts organisation. Rising costs of materials and supplies have placed many of these craft communities in financial struggle. A recent article in the Times of India predicts the price of steel to rise between Rs 600 and 1000 per tonne. On the other hand, statistics from the All India Handicrafts Board show that craft export has risen from 230 million to over 90 billion since the past 50 years. With rising economic and political issues in India, the craft sector is struggling to uphold. Although an interest to retain the culture of crafts is seen in designers and institutions. Handicrafts are the creative products made by the skill of the hand without the help of modern machinery and equipment. Nowadays, hand-made products are considered to be a fashion statement and an item of luxury. India's rich cultural heritage and centuries of evolutionary tradition is manifested by the huge variety of handicrafts made all over the country. Handicrafts are a mirror of the cultural identity of the ethnic people who make it. Through the ages, handicrafts made in India like the Kashmiri woollen carpets, Zari embroidered fabrics, terracotta and ceramic products, silk fabrics etc. have maintained their exclusiveness. In the ancient times, these handicrafts were exported to far off countries of Europe, Africa, West Asia and Far East via the ‘silk route’. The entire wealth of timeless Indian handicrafts has survived through the ages. The